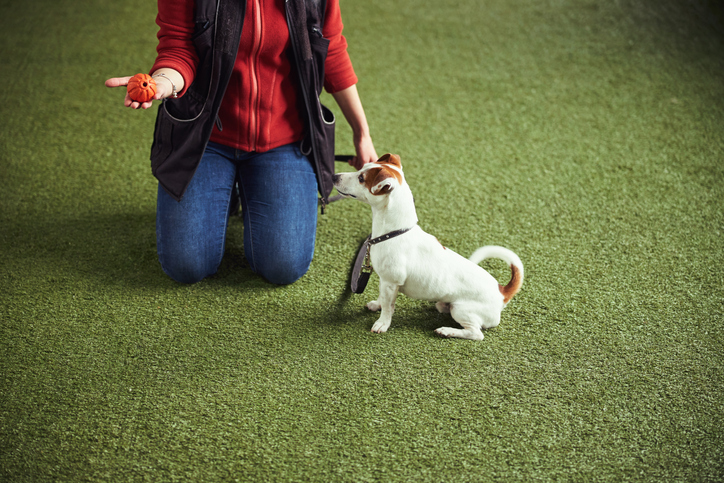 Katherine is a Certified Canine Behaviour Consultant, Certified Dog Trainer, Karen Pryor
Academy Certified Training Partner as well as a Service Dog Coach who has been
training dogs and their owners professionally for 30 years.

Katherine has taught classes and conducted seminars and workshops all over North
America on topics ranging from puppy training to dog behaviour to disc dog to
performance sports. Katherine’s experience includes training puppies and dogs of all
ages, temperaments, breeds, and backgrounds and her own dogs have excelled in the
sports of Disc Dog, Musical Freestyle, Flyball and Dock Diving.

Her focus is on strengthening the bond between owners and their dogs and enriching
the everyday lives of dogs improving their quality of life. She helps dog owners
understand the behaviour of their dogs and better communicate with them. She shows
owners how effectively train their dogs and overcome behaviour challenges using dog
friendly and simple methods that are motivating and fun for both dog and owner.
Katherine keeps up to date and incorporates current scientific research in animal
behaviour, welfare, psychology, health and wellness into all her techniques and
methods of training. Since 1992, Katherine has attended over 400 clinics, seminars and
workshops, both in person and online, on various topics including animal behaviour,
physiology, health, and sport performance.

Katherine travelled to Sweden in May of 2010 where she spent five weeks training with
Bob Bailey in all levels of his “chicken camps” and was a regular attendee of the PABA
series for dog trainers held at the OVC when she first began training dogs.
She has learned in person as well as online from many of the greats including Bob
Bailey, Ken Ramirez, Tobias Gustavsson, Karen Pryor, Turid Rugaas, Steve White,
Roger Abrontes, Michael Shikashio, Leslie Edie, Dr Ian Dunbar, Christine Zink, John
Fisher, Jesus Rosales-Ruiz, Terry Ryan, Dr. Pamela Reid, Carolyn Clark, Grisha
Stewart, Denise Fenzi and numerous others.

Since 1992 her own dogs have consistently performed in multiple sports at a high level
achieving over 150 titles with various dogs in multiple dog sports including disc dog,
flyball, dock diving and musical freestyle. Katherine and her dogs have performed at
many local fairs, performance shows and demos as well as larger venues such as the
RCMP Musical Ride and the Toronto Police Games. Her dogs have performed with the
Official Superdogs as well as the WoofJocks Performance Teams.

In the sport of Disc Dog, Katherine and her mixed breed dog Tallulah were the first
Canadians to win a Disc Dog World Championship when they won the Microdog
Division at the Skyhoundz World Championships in 2007. Her dog Zelda came 5th in
the world that same year. Since 2007 Zelda and Tallulah were multiple time Canadian
Regional Skyhoundz Champions as well as multiple time World Finalists in both
Skyhoundz and USDDN. Both dogs qualified for, and competed at, the World Level in
Chattanooga TN until 12 years of age and her younger dogs are following in their paw
steps with placements and World Finalist status across various venues including
Skyhoundz Classic, DiscDogathon, Xtreme Distance and USDDN.
Although no longer actively participating in the sport of flyball, several of her dogs ran
on teams achieving Ontario Regional Champion Status in both Regular and Multi Breed
Classes in the very competitive NAFA Region 2.